Fake Smiling Is Bad For You, (As Well As Irritating To Me)

04 Mar Fake Smiling Is Bad For You, (As Well As Irritating To Me)

I am guilty of this too. I could pretend I’m not, but then there would be pretense on top of pretense.

Today’s New York Times reported something we probably already knew. (One of my favorite kind of studies and forms of reporting…so satisfying). Fake smiling has a lousy effect on your mood, whereas real smiling is good for it. Here’s the news:

“…scientists examined what happened when the drivers engaged in fake smiling, known as “surface acting,” and its opposite, “deep acting,” where they generated authentic smiles through positive thoughts, said an author of the study, Brent Scott, an assistant professor of management at Michigan State University.

After following the drivers closely, the researchers found that on days when the smiles were forced, the subjects’ moods deteriorated and they tended to withdraw from work. Trying to suppress negative thoughts, it turns out, may have made those thoughts even more persistent.”

So, as your attorney (I am not your attorney. But I am feeling in a Hunter Thompson-ish mood) I advise you (I don’t like to give advice, so let us just say I am sharing my own experience) to cut it out. Whenever possible. Me too.

Happy Day all around. (I mean, a really happy one. Not a fake happy one.) 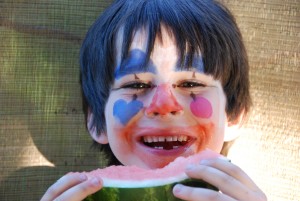