Natural Rhythms, From Rivers to Roos

I just spent a couple weeks in New Zealand, or “Aotearoa”– “land of the long white cloud,” as a stopover on my way to teach in Australia.

There is a reason clouds occupy a prominent position in the Maori name for New Zealand. 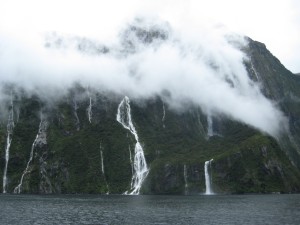 Milford Sound: one of the wettest places on Earth

For example, on the Milford Sound, where my husband, his brother, his brother’s wife and I hiked for 5 days, it rains an average of 182 days per year, and there is a mean annual rainfall of about 268 inches (6,813 mm), it is considered the wettest inhabited place in New Zealand and, as Wikipedia tells us, “one of the wettest in the world,” with rainfall reaching up to 10 inches (250 mm) in a day.

Anyway, it is widely thought that the Maori people are the first to inhabit NZ, and they didn’t get there until about 1000 years ago. What does this mean? This means, to me anyway, that, despite the fact that humans have managed to wipe out native species of birds like the moa (a flightless bird that reached up to 9 feet tall), Nature has prevailed in NZ in a way that I, at least, rarely see in environments that have hosted humans for considerably longer. Whether it is due to this, or other factors (or both), nature’s rhythms and qualities are particularly impressive in New Zealand. Consider these unusual rhythms: 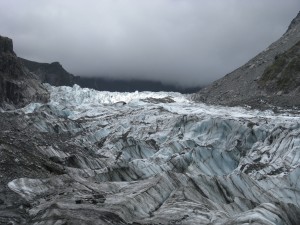 Aside from those impressive rhythms, here is another tribute to the purity of NZ’s land and environment:

When we hiked (“tramped”) the Milford Track, the water was pure and safe enough to be able to drink from freely and without concern for parasites. We would refill our water bottles from the streams along the trail.

It felt–at the risk of sounding dramatic–miraculous, to be able to enjoy water straight from the streams, in a way I haven’t since I was a child. The tastes and qualities of the water differed from stream to stream; some sweeter, some earthier, heavier, lighter, sharper, some rounder. It was a delightful reminder of why Caraka (author of ancient Ayurveda treatise) devotes a lot of page real estate to the various qualities of water from different sources. I felt like the H2O equivalent of a wine connoisseur. The joy of quenching thirst with clear, tasty (in a good way) water over the course of 53 km (about 40 miles) of lovingly maintained trails and breathing clear, nourishing air the whole way…was…let us just say there is little I can say I appreciate more than that. 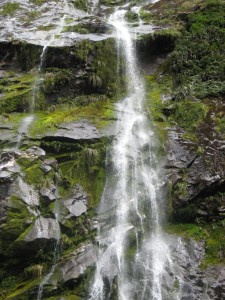 Shortly before heading into the bush, I read that the tech industry is hard at work at efforts to speed up the Web, because, if people have to wait even 250 milliseconds (a millisecond is a thousandth of a second) for a page to load, they move on to a more instantly visible page. I guess that is sort of a rhythm itself… 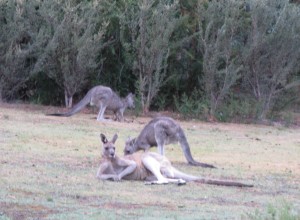 Lounging Roo in the Bush

It was gratifying to unplug for a while and allow the rhythms, tastes and qualities of the natural world to prevail.

All the best to you all, now from Australia.

(this is repurposed from a blog originally posted by Dr. Welch 09 March, 2012) copyright Dr. Claudia Welch 2012