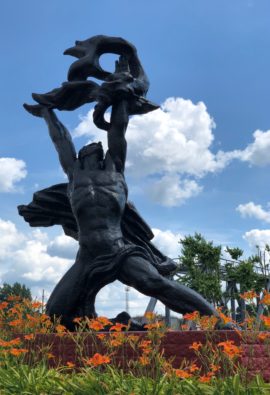 Posted at 10:13h in Articles, Reflections by Claudia Welch

I hope this finds you finding, good in the, “bad” and with a strong footing in the, “good.”

I recently returned to North America from Eastern & Northern Europe where, among other things, I co-taught some events with my dear friend and colleague, Dr. Robert Svoboda in Ukraine (there is no, “the”; it is not, “The Ukraine” much the same way that it is not, “The France” or, “The Russia”, despite the fact that it is SO common to refer to it with a, “The” in front of it) and in Estonia.

When we weren’t teaching, we spent some of our time, among other things, visiting Chernobyl, in Ukraine, and attending the 2019 Laulupidu in Estonia. You probably remember—or have heard of the former and may well not have heard of the latter.

Chernobyl:
On August 26, 1986, nuclear reactor #4 at the Chernobyl plant, did what it was widely thought at the time as impossible. 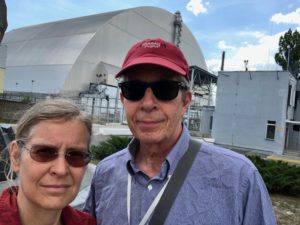 It exploded. Initially, residents of the town of Chernobyl and the nearby town of Pripyat, were told not to worry, it wasn’t too bad and blah, blah, blah. By the time the truth came out and all was told, and despite the official death count being 31 (thirty one!!!!), it is nearly impossible to calculate the number of resulting diseases, deaths and dollars spent. In 2017 a steel sarcophagus dome sort of protective building was finally finished being erected over reactor 4. I understand it cost 2 billion dollars and was designed to last 100 short years. Over these next 100 short years, the plan is to move the remaining nuclear waste in reactor 4 to the new nuclear waste storage facility, within sight of the old plant.

I learned the tip of the iceberg about radiation—which is a lot for me, more than I can write here and I’m positive I’d get enough wrong as to warrant not writing almost anything at all but here is a surprising thing: some of it can be washed off. I don’t know if they just use water or if they maybe use some boron in it but, for example, they regularly WASH down the buildings, walkways, parking lots, etc. in the environment directly around the Chernobyl plant, ironically making the area one of the safer areas in the neighborhood. “The neighborhood” being the, “exclusion zone”, which is 2600km² in size, including the curious, now abandoned, city of Pripyat. Another surprising thing, is that one is able, “safely” to visit Chernobyl and Pripyat, whilst taking certain precautions, and wearing your own personal and cumulative Geiger counter around one’s neck. I learned enough to feel more or less safe about Dr. Svoboda and I touring Chernobyl and Pripyat for a short time—which we did—whilst also feeling slightly distrustful about the process as there were a few sort of fishy things about ….the whole thing. But going into that would make this post even longer than it will be. So I’ll skip it.

Before I went, I watched HBO’s new miniseries, “Chernobyl” which –while not entirely factually accurate, I found to be an educational prelude to an in-person trip.

Laulupidu 2019.
Speaking of educational preludes, the documentary, “The Singing Revolution”
was an excellent prelude to attending the 150th year anniversary of the Laulupidu—the song and dance festival of Estonia. (Wikipedia also has a good entry for The Singing Revolution).

This revolution was an entirely bloodless exit and restoration of independence for Estonia from the USSR in 1991. It was a revolution achieved in great measure through song—including song at the Laulupidu. This year, at the festival’s climax, there were roughly 30 thousand singers and 80 thousand audience members, with hundreds or thousands more on the outside of the grounds. With a population in Estonia of about 1.4 million people, and with the role of song being so pivotal in their independence and culture, the spirit of this festival is felt throughout the country. 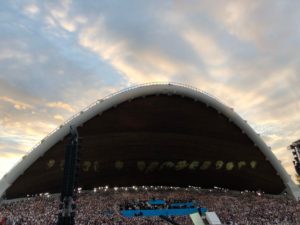 While one experience—touring Chernobyl—would seem in the neighborhood of creepy and horrific and the other—attending the Laulupidu—would seem entirely uplifting and, to an extent both were so, it also was not entirely that black and white.

Personal Lessons & Reminders from Chernobyl & Laulupidu
In no particular order, I am mixing these two very different experiences together in the same list, because: 1. I happened to personally experience the two very near together on a timeline and what fires together wires together—so the two are somewhat connected in my brain and 2. I don’t foresee carving out the time to write about them again in the near future.

The fact that Chernobyl’s reactor 4 exploded was entirely inconvenient for the reputation of the Soviet Union, for the plant managers, and the residents of Pripyat. However, denying the situation was as bad as it was meant a delayed evacuation. Which caused more suffering than is easy to calculate.

Laulupidu: mixed with the uplifting reality of about 100 thousand people singing together, is the knowledge that –as I was told—many 30 year-olds neither grasp how difficult life was before independence, nor understand the monumental efforts behind achieving it. Therefore they are not fully awake to the threat that many see the new, very conservative government poses to some of the very themes the Laulupidu represents: tolerance, harmony, love, peace. With these truths lurking beneath the song, there was a bit of sobriety mixed in with the jubilation of the festival.

I am reminded of the role denial plays in health. I have seen what happens when I am active when I need to do nothing; when I do nothing when I know what and that something needs to be done, when I push when my body when it gives me clear signs to stop; when I consume things (foods, drinks, substances, media, stories, beliefs, etc.) that make me feel poorly—either immediately or later. When I ignore my inner voice.

Ignoring signs from our bodies, spirits, machines, the earth and other aspects of reality make us or them sick in one way or another and really complicates things and compiles damage that would’ve been bad enough if we’d just faced the problem in the first place. 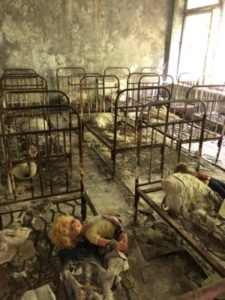 So many things can lull us to sleep, maybe especially our own desire to stay asleep. Visiting places that are monuments to history, horrors, beauty, ideals, cruelty—these places all can help serve to put me in the path of inspiration to awaken.

4. Use common sense. If we see a nuclear power plant glowing, let’s not believe that there is nothing to worry about and go hang out on a bridge with a good view as if it is New Year’s Eve. If we are unhealthy and eating fast food, anxiety-ridden and drinking coffee, tired and pushing through it for decades, let’s not pretend everything is okay. Let’s be the guys that get in the boats as soon as there is a glowing sky over a flaming nuclear plant, before waiting to be told that it was a problem. A small minority of Pripyat residents got in the boats and quietly left right away. Let me be that guy.

6. Even horrible things have silver linings.

At least some Ukrainians are very happy to be independent from Russia and believe that, as they told me Gorbachev said, the Chernobyl accident was the cause of the collapse of the Soviet Union (I heard 18 billion dollars was spent on the accident & cleanup—causing there to be insufficient funds to keep it all together). It made Russia vulnerable, which is in part what allowed Ukraine and Estonia to become independent. Had reactor 4 never exploded, would Ukraine and the Baltic countries become independent? Whether or not one believes their independence is, “good” or, “bad”, the fact is many of the residents in these countries see this as a silver lining.

The silver lining of being governed by the USSR: I was told the following: that, when the Soviet Union was governing Estonia that the markets for average Estonians, were empty. Many people had their homes taken. They were hard times. One woman told me, “Instead of cakes in the desert section, a mouse would run by.” Aside from rations of certain things, there was nothing. But… this forced people to have gardens and so most people were eating whole foods and were healthier than they are now.

7. Nature is resilient. 33 years after humans deserted Pripyat, plants and animals are reclaiming the city. It is possible that humans may be more harmful to nature than a nuclear accident.

8. One person can make a difference. 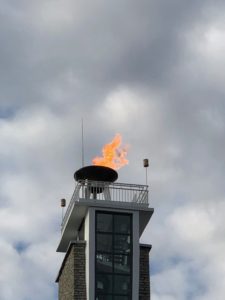 While much of the power of the Laulupidu lay in the sheer numbers, individuals are also celebrated and continue to inspire. Tõnis Mägi was one of the leading figures and influential voices—one of the so called, “first line” singers– in Estonia’s singing revolution. His song KOIT (a dawn) is the first song that opens and accompanies the lighting of the fire at every Laulupidu.This year, he gave a stirring, “solo” performance as well, later in the program. “Solo” in quotation marks because of the some 100 thousand people accompanying him. For decades this man has been inspiring people to meet their ideals.

9. Music can be an effective prayer. It can focus and harmonize prana of thousands, harmoniously and effectively. As Tõnis Mägi said about the role of song in the revolution, “We had this one mind, that was why we got independent. When 200,000 people make a prayer like one mind, even if a lot of them are even atheists – I think that was the biggest reason we free. That’s how things are happening.” In the dance portion of the Laulupidu, it was amazing to see not only 10,540 dancers of all ages but roughly 30K audience members of all ages paying attention to beauty and beautiful themes (life stages, the forest, harvest, the sun, the earth, protection from making physical or mental mistakes, etc. for 2 hrs and 45 minutes on hard stadium seats. On the final day of the festival—the song-only portion, some 30 thousand singers of all ages and 80 thousand audience members of all ages 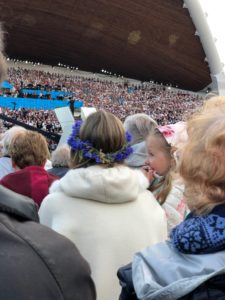 sat together tightly packed, again on hard stadium seating or the ground; this time for 7+ hours straight. Everyone was focusing on the same themes. Rather difficult to leave this without feeling more love and tolerance for fellow human beings. As Triinu Taul, singer/composer of the second to last song (in the video clip below) at the dance portion of the Laulupidu, writes “[the world of sound] is universal – it influences us more than we could ever imagine. Music has an ability to repair as well as destroy.”

Seems nothing may be black and white. Except this café I’m sitting in while writing this, it occurs to me. It is actually called, “Black and White Cafe & Bakery.”I mean it really is. I began this post, talking about nothing being black and white before I came here to this new café to get over my writer’s rut and get some space to write. 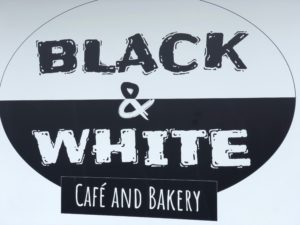 So…maybe some things are black and white.

Thank you for being there.
In Love,
cw