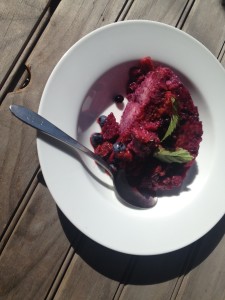 I grew up hearing from my guru—many times—of the necessity of minimizing the five passions: lust, anger, greed, attachment and egoism. To eliminate these, it was important to control the senses. When we see, hear, taste, touch or smell things, this leads us to desire them, become angry or frustrated when we cant get them, we want more of them, become attached to, and identified with them. Controlling the senses helps control the five passions. Ayurveda also teaches that controlling the senses is also the best way to promote happiness.

But controlling the senses is not so easy. In a study of more than 1 million people around the world, self-control came in last of virtues people professed to have. I had been reflecting on the relationship between desire and discipline when I recently [that is to say, maybe in 2013?] read a New York Times article on decision fatigue.

“Decision fatigue” is a term used in Western science to describe a phenomenon most of us probably experience on a daily basis. Unlike physical fatigue, it is the biological fatigue we feel when we repeatedly exert willpower to resist temptations or have to make many decisions.

Generally when we think of decisions, we might be tempted to think of the bigger ones in our lives: Should I go to school? Should I become a carpenter or an engineer? Should I get married, have kids, etc. But we encounter myriad small decisions on a daily basis. Should I or should I not eat that tasty ice cream, buy that shiny thing, have sex, listen to this gossip, watch this episode of Friends, take a walk, eat alone or with my co-workers? With an average computer user looking at over 36 Web sites per day, online activity generally is even more decision-making intensive. Should I check facebook? Follow a link that someone sent me in an email? Buy something? In fact we make many decisions that we may not even identify as decisions, for example, when we decide to repress an emotion or urge or craving. Decisions and willpower have been found to be intimately connected, and each decision made, or act of willpower executed, contributes to decision fatigue.

It turns out that the more decisions we make over the course of a day, and the more we exert our willpower, the more likely we are to suffer from decision fatigue. The more we suffer from decision fatigue, the more likely we are to make poor choices and the less self-discipline we are left with. Consider this study: when participants repressed their tears and emotions during a sad movie, afterwards, when they engaged in mentally challenging puzzle or squeezing a hand-grip exerciser, they gave up more easily than people who did not repress their emotions during the film. Their will power—like other forms of exertion—could be exhausted.

Supermarket powers-that-be and other salesman are well aware of the practical effects of this phenomenon. That’s why impulse-buy items are placed at the checkout counter. You’ve just navigated yourself and your impulses throughout a quarter mile walk through the grocery store, making, I don’t know, fifty something decisions (unless you are going through the express lane). You are likely to have decision fatigue by the time you reach the checkout lane, where the candy bars and the magazines await.

Studies suggest that we spend three or four hours resisting desire every day. When we decide to repress urges repeatedly, at some point, the dam tends to give way. Ayurveda classifies natural human urges as the urges to pass gas, feces, urine, to drink (when thirsty), eat (when truly hungry), sneeze, sleep, cough, burp, breathe heavily upon exertion, to yawn, cry, vomit or ejaculate.

The suppression of any of these natural urges may lead to various imbalances and should not, therefore, be repressed or suppressed. Ashtanga Hrdayam:Sutrasthanam:IV:1

We now have a quandary: we want to control our senses, but repression creates decision fatigue that is likely to result in poor decisions, results, and even in poor health.

Don’t Panic. There is always hope. Studies show that people with the best self-control are people who have built in structure and healthy habits into their daily routines. Instead of wearing down their willpower and creating decision fatigue, they rely on their daily routine to direct many of their actions and save their decision-making energy for the important things. They prefer to avoid crises, rather than manage it. They give themselves reasonable deadlines. (I like to give myself, as a rule of thumb, four times longer to do something than I think it will take). They schedule important meetings in the morning and don’t allow them to be scheduled back to back. They try to make important decisions in the morning and won’t make them when they are tired or on an empty stomach (decision making is an energy, like many, that requires glucose to function well). It seems we have the ability to adhere to a daily routine without taxing our decision-making muscles.

Ayurveda teaches us that dinacaryā—a healthy daily routine—is a cornerstone of health. [To learn what Ayurveda suggests as a dinacaryā, you can read Dinacaryā: Changing Lives Through Daily Living] Ayurveda suggests that it is ideal to wake, eat and retire at the same time each day; have a diet, self oil massage, and exercise—that are all appropriate to our constitutions, that we meditate at the same time every day. Ideal dinacaryā also includes prescribed ethical behavior that runs along the same lines as the yamas (a list of attributes that we doo well to avoid) and niyamas (a list of qualities we do well to cultivate). It corrals our daily activities and behavior onto an established track.

For example, if we believe “thou shalt not kill” to our very bones, then this is never something we have to “decide” in the moment. It’s simply off limits. Problem solved. Precepts like the yamas and niyamas or the Golden Rule (do unto others as you would have them do unto you), can serve as such behavioral prescriptions.

This is not to say that it is always easy to adopt such prescriptions, but it is something that, while it may cause decision fatigue to follow them at first, it is something that may get easier. My guru has likened the mind to a bird and the process of trying to control it to putting the bird in a cage. At first the mind flutters around, banging into the bars but, little by little, it settles down and becomes docile. Once a disciple asked my guru about anger. The disciple told my guru that, when he was in the middle of an angry episode, that there was nothing he could do to control it. My guru told him that this is very true and that it was important to focus on the time period between episodes of anger, to train the mind and the nature, through meditation and other appropriate efforts between episodes, and then the episodes would gradually become less frequent and less intense.

Another helping factor may be the company we keep. When I was a child my guru wrote me a letter. In this letter, he wrote, “Keep good company. Good company makes a man great.” Company that engages in behavior we wish to emulate can make it easy—even enjoyable—to practice that behavior. Between dinacaryā and good company, discipline becomes habit and our mental resources are freed up for new possibilities.

By Dr. Claudia Welch repurposed from a Newsletter around 2013